How do they face their children?

Having touched on population growth in the last entry, it’s time for a quick look at how economic growth has become a serious threat to the global ecosystem. This is a large topic which has filled a good number of books. But on its most basic level its logic is simple. The key point is that neoclassical economics, the dominant economic model for much of recent history, is based in large part on an assumption that the economy, as a whole, can and should continue growing forever. A major part of such growth is its physical dimension, which is well reflected in increasing “throughput,” defined by Herman Daly as “the flow beginning with raw material inputs, followed by their conversion into commodities, and finally into waste products.” (p. 28 ) The neoclassical view promotes unending physical growth and throughput

The problem with forever

When confronted with the prospect of depleted natural resources as a result of ongoing growth, the neoclassical economist’s answer is that human capital in the form of technical innovation will always make up for lost natural capital (natural resources), or even that we will always find new ways to extract ever more resources. (An article by the late economist, Julian Simon, provides a particularly striking example of this thinking.) The flaw in this model is self evident. It fails to acknowledge that the earth and its resources, as well as its absorptive and regenerative capacities, are finite. Indeed, it contrasts sharply with the newer “ecological economics” model which starts from the assumption that the economy is a part of the finite ecosystem and so should strive to respect its limits, lest it damage it.

A clear illustration of the difference between these views (and a much fuller discussion of this topic) is found in a paper (pdf) co-authored by Jeremy B. Williams whose excellent blog, Ruminations, appears in my blogroll. Williams and his coauthor, Judith M. McNeill, provide simple diagrams, much like Figures A and B below, to show the difference. The neoclassical model (figure A) sees the economy as everything. If the ecosystem is even acknowledged, it is merely a part of the economy, and the latter is free to grow forever. (Imagine the outer square expanding.) The ecological economics view (Figure B) sees the economy as a part of the ecosystem, which we know is finite. The economy cannot grow forever due to the constraints of the ecosystem upon which it depends. If it grows too much it impinges on and damages the ecosystem. 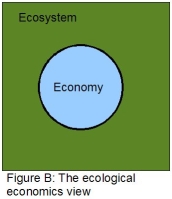 Which is correct? It’s amazing, really, that there’s any debate about this, but a simple thought makes the answer clear. Imagine human society in prehistoric times, when people survived as hunter-gatherers. No one would disagree that in that scenario humans and everything in their culture were just a small piece of the ecosystem. Now consider the advent of barter and the subsequent early use of money. We then had an “economy,” such as it was. That economy was a part of human society. Did its development somehow extract this portion of human society from the ecosystem? Clearly not. Humans and all their activities, including their economy, still existed within and depended on the ecosystem for their survival. And so it remains today.

Invested in business as usual

Nevertheless, academic theories can be slow to die, especially when people have financial stakes in them. Ecological economics has not yet supplanted the neoclassical model as the dominant view and, not surprisingly, individuals who have historically profited from seemingly endless growth do not want that to change. They do not want to accept limits. There is simply too much lure of profit in continuing on the same path, regardless of its impact on the ecosystem or future generations. (The psychologist in me can’t help but conclude these people must employ some form of denial about the impacts of their activities. Otherwise, how can they face their children or grandchildren?)

Exxon is a case in point. For years they have blocked efforts to address climate change, and have waged a propaganda campaign to sew doubt about the human contribution to global warming. They’ve made so much money with business as usual, that to admit the need for anything else is, to them, unthinkable. (There was recently, by the way, a small sign they may at last be softening their position just slightly. But unless they are convinced they can pursue another course without any impact on profits, I won’t be holding my breath.)

The case of Exxon is just one example of how our blindness to and denial of limits to growth have caused most of the environmental damage we see today. It’s time we adopt the ecological economics model and think about a shift to its alternative to endless growth, the steady state economy. More on that in an upcoming post.
_______

8 responses to “How do they face their children?”