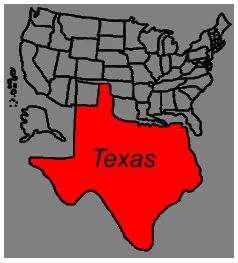 Some people deny the problem of population. They insist that neither the present world population size nor its continuing growth is a problem. Some of these folks are influenced by certain writers, often far to the right politically, and typically focused on mainstream economics, who espouse this sort of population denial. (We’ll look at some of those writers in the future.) Others are merely drawing conclusions from their everyday observations. From neither contingent have I seen a very substantive argument, but a common argument from the second group is especially silly.

Texas is great, but this is ridiculous

Usually, it goes something like this: “There’s no population problem. It’s a myth. You could fit every human being on earth inside the state of Texas with plenty of room for everyone.” You can see an example of this in comments on Anderson Cooper’s blog on the CNN site. (Search the page for the phrase “state of Texas” – without the quotes.) [1]

The assertion may, at first blush, have some intuitive appeal. But by rewording it we can begin to see how silly it is. In essence, it’s saying, “As long as there’s plenty of room on earth in which to fit people physically, the population is not too large.” Is that starting to have a little less appeal? Well, let’s extend the argument a little. We might compare the size of Texas to the world’s land area.

Alright, everyone squinch in a little closer to El Paso

My reason for pointing out this absurdity is that it brings the problem with the “Texas” argument into clear relief. “Fitting” is not the same as “supporting.” The question isn’t, “How how much room is there for people on earth?” It’s, “How many people can the earth support at a decent standard of living, without damage to the biosphere that would prevent future generations from enjoying the same standard of living?” In other words, when we ask whether population growth is a problem, we must consider issues such as carrying capacity and ecological footprint. If we were to put everyone into Texas, a fair number of the scientists who’ve examined such issues would say we would need all the rest of the earth’s surface, and likely more, to support those people in Texas.

We’ll touch later on carrying capacity and ecological footprint as well as estimates of optimum population size. They are not cut-and-dried, but are important topics in any discussion of population growth. For now, you know what to say to anyone offering the “Texas” argument: “Yeah, and we’d need the rest of the earth and probably more to support them!” 🙂

For more depth on this topic, featuring evidence that we’ve overshot the planet’s carrying capacity, try the PNAS article mentioned in comments here by Bill Harris.

[1] There is an editor’s note saying the blog receives hundreds, sometimes thousands of comments each day, and so cannot post all of them. It’s curious that a comment making this goofy argument about fitting the world’s population into Texas was one of the chosen few.
_______
Image source: Uncyclopedia, posted under a Creative Commons Attribution-NonCommercial-ShareAlike 2.0 license.

11 responses to “The Texas argument”